Last weekend I ran my fastest 5k of my life (as far as I am aware, at least). As I crossed the finish line, the clock overhead showed that for the first time I had traveled 3.1 miles in less than 20 minutes (19:56 to be exact). I was excited – exhilarated even. The months of hill runs, track workouts, tempo runs with Rod and weight loss efforts were translated into one, beautiful sub-20 minute burst of energy.

The thing is, I wasn’t even shooting for a particularly fast time. The race was for charity and had an exceptionally small field of runners (and a rather sizable field of pure walkers). Over the past few months, my running focus had drifted towards longer, more “challenging” races: half marathons, full marathon, multi-day races, ultra runs. On the weekends I have been pushing myself out the door and across 15+ miles at a pop. The last thing I thought about or took seriously was a little old 5k. Even slightly longer distances became races out of consideration. When I signed up for the Thanksgiving morning 8k I thought to myself, “isn’t there anything longer? Something more challenging?”

I have moved into a long-distance mindset and, with it, I have started placing more value on longer distances. With my mind firmly in a long-distance space, I took pride and excitement in running for long stretches of time. Running for hours alone is a challenge with some possible risk (not to say you can’t die during a 5-k but that is a much less heroic death). Long distance running feels dangerous and exciting – a punk rock movement of senseless rebellion against an all-too-comfortable life that we are afforded.

When it came time to run the 5k, I didn’t really feel the typical pre-race jitters or excitement that I normally would. In fact, I debated running to the race or scheduling another workout afterwards to make up for the paltry distance this race would provide me.

When I finished the race, I had a whole new mindset. I had forgotten how much I love running 5ks. The race last Saturday reminded me of a few important facts:

Last weekend was the first time I have felt fast in a long time. With distance running, your mindset has to be towards conservation – how hard am I pushing and how much will I have to push later, what is my energy intake and will I hit the wall, am I going to have to go to the bathroom and will I make it to a designated area or will it happen in my pants? With a 5k, the distance is so short that you don’t need to worry about storing up and saving a whole lot – all you have to do is go. With such a short distance, pre-race nutrition is less crucial and during-race nutrition is non-existent. All you have to do is run fast and hold on. 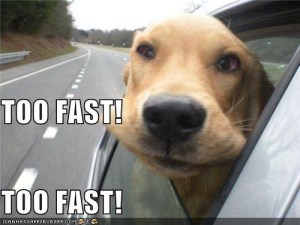 When I walked up to the line last weekend the starters area was remarkably packed. I waded my way through a throng of young looking high school (or middle school, maybe) cross country runners, hungover looking college students and weekend warriors stretching with such vigor I was convinced they would injure themselves before the gun went off. Since I lack the confidence to stand directly on the starters line, I hung about three or four feet back. The race director was just off to the left and was calling out time until start.

I didn’t really feel nervous like I normally would. I had no concern about finishing the race. What time could I get, I wondered. Should I go for a fast time, or just enjoy myself. What if I try to go fast and I can’t? Should I be stretching?

Anxiety started to sink into the pit of my stomach like hot, thick soup. Around me people started to shuffle and mill about. A college-aged boy immediately to my right started to aggressively jump up and down, slapping his knees on the up and slamming his feet on the fall back to earth.

A 300lb man coated with a thin sheen of sweat pushed his way through the crowd, shoved me aside, and toed the starters line. This man apparently had confidence to spare. 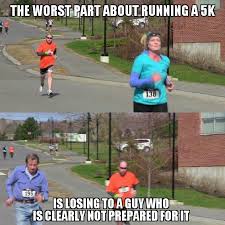 The gun went off. The confident man in front of me made all the motions of an Olympic god pushing off for a sprint with all the speed of an old and badly injured sloth. The man took several power steps followed by several more, walking deliberately and forcefully like he had just made the closing statement in a heated argument and was now dramatically leaving. The start of the race was frantic. The two college students began to weave wildly, pushing children to the side and elbowing runners out of the way. In the lead was a child no more than 7-years old maintaining what must have been the fastest sprint of his life (he faded less than 90 seconds later, moved to the side and, from what I could tell – dropped out of the race). I slowed myself to let the crowd thin out. After about 200 yards, I had enough room and began to pick up my speed. I breezed past whole swaths of people across the first quarter mile. I felt a tightness in the top of my thighs that told me I was pushing at a fast clip. My lungs were pulling deep and I all at once realized how perfect my posture felt. All at once things seemed to come together. I felt fast and fast feels amazing.

With the crowd thinned, I was running with a pack of about 20 others people – all of whom looked like seasoned runners. The pack was spread out across roughly 30-40 feet. All questions about my race intentions left me and I was all at once certain – I wanted to run the best fucking race I could.

I started to think – what’s the plan? How long do I spend warming up before I start overtaking? If I start picking people off now, I risk losing pace late and becoming a target for other runners. If I wait too long I also risk my legs becoming stiff in a moderate pace and taking too longer to get to where I could really push it. The past several months were spent focusing on pacing and planning across hours, breaking down races into 1-3 mile chunks that now, having a plan for the next 2 minutes seemed unfathomable.

I decided I would hold my pace as best I could for the next half mile. I put all my focus into my feet – short steps, landing on my midfoot, trying to be smooth and gentle.

With the first mile almost done, I started to push the pace and pick people off. I set my sights on the next closest runner and watched the cadence of his steps. I worked to speed my feet up faster than his while still keeping good form. I quickly pulled up, next to, and then away from him.

With a good distance between me and him, I slowed myself slightly back to a comfortable pace.

Then, I picked the next person and sped up again.

With 1 mile left I was running out of people to catch. This made me worried – had I gone out too fast? Possibly. Probably.

Without a visible target to run after, I was suddenly very aware of the pain and fatigue in my legs. The tightness that once showed me the power I was pushing out was now screaming at me to slow down.

A man in a yellow t-shirt closed the distance, slowly overtook me and then ran on. He was running with a smooth, effortless stride that looked like he wasn’t even aware that he was running at all. Throwing all planning to the wind, I pushed hard to try to make up the position I had just lost. For about 200 or 300 yards I was making good time and gaining on this late-push runner. My legs struggled to maintain form and my lungs could no longer pull deeply enough to meet my need for air.

I slowly started to fade and my mind drifted towards stopping.

Then my shoe came untied and I had to stop all together.

When I stood back up from tying my shoe my legs were heavy and it was a herculean effort to get back up to speed. I looked to my watch and started to worry if I would just miss 20:00 yet again. Had my early push knocked me out? Did my inability to properly tie my shoes cost me this arbitrary milestone?

The end of the race had us running into the University of Tampa stadium and around ¾ of the track. As my feet hit the track I could see other runners ahead of me. I could also see the clock and that I had precious little time before 20:00 would come and go. I lowered my gaze to a few feet in front of me.

Coming around to the last little stretch I saw the clock hitting 19:40. I tried to estimate if I could cover the remaining distance in time.

I ran under the arch and was clear to the other side walking before the clock hit 20:00. I had done it.

Crossing the finish-line, I felt totally exhausted. I walked as perfectly upright as I could manage and tried to catch my breath.

A few minutes later, my breath was back and I felt great. I drank some water and wandered around the finish-line waiting for Diana (who, by the way, ran amazing and also set a PR. I am constantly finding new reasons to be proud of her). Once she was back, we made our way to the post-race area and each ate a bagel. The hunger I felt and the speed with which I ate my bagel made me realize that after running a hard 5k I didn’t have any of the terrible stomach distress I would have after longer races. Completing anything longer than 10 miles leaves my stomach completely hollow and collapsed onto itself. Eating makes me feel sick and I can only tolerate liquids for the next few hours. After 3 miles, regardless of how hard those miles were, my stomach was open and eager for carb goodness.

Once we left the race, Diana and I had a full day. We went to brunch, went to the beach and then watched an orchestra performance in a park. We were out all day, active and energetic, and it felt easy. Such a short distance gave me a good workout and a boost to my mood without completely knocking me out for the day. 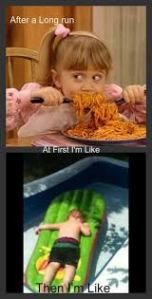 One day later I was back to running. Being only 3.1 miles, it is very unlikely that an injury could happen or that your training would have to dramatically be altered after a race. Sure, the random ankle twists or hip tweaks happen when you are pushing that hard. What I am talking about is the long, repetitive contact-related injuries that you see at longer distances: nerves slowly getting pinched, shins getting fractured over the course of 10 or 15 miles. One day later and I was injury free and had a renewed enthusiasm for training.

While I still have my heart set on longer distances, I have rediscovered my love for short, scrappy 5ks. Here are a few ways I plan to use 5ks, even though I still plan to be a distance seeker:

I'm a guy. I'm also a psychologist. I'm also a hipster. I'm not totally sure if I'm a runner but I'm willing to find out. View all posts by runningexperiment